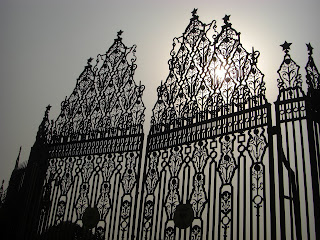 Rashtrapati Bhavan is fun to say.
And fun to see.

It has a beautiful gate, which stops you from getting any closer to the presidential residence, but you can stand there and admire it for as long as you like. 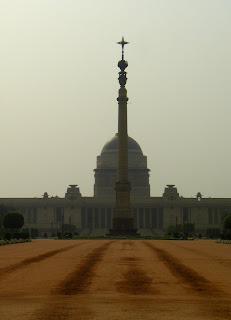 Standing here beside the gate, you can also see the Jaipur column, which was a gift from the Maharajah of Jaipur to the British when they were constructing Luyten's Delhi. It has an inscription on it which reads:

In thought faith,
In word wisdom,
In deed courage,
In life service,
So may India be great. 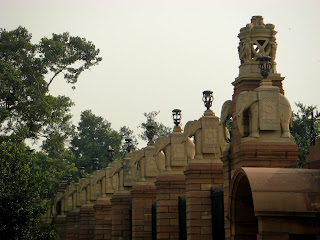 Rashtrapati Bhavan stands at one end of Rajpath and can be seen from India Gate.

I wouldn't recommend walking that distance, though.
Or walking from the back side, where the entrance to the Mughal Gardens is.
Both are farther than you imagine. Especially when it's hot and there are not enough ice cream sellers around.
When those auto drivers go past asking whether you want a ride, don't shoo them away. This is good advice--I know because I ignored it twice.

This last picture shows what is known as Lutyen's Waterloo. 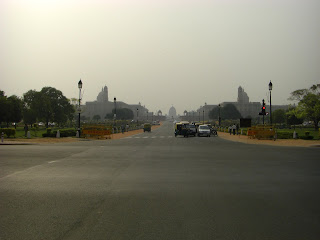 Sir Edwin Lutyen, in his design, wanted there to be a perfect eye line from India Gate to the residence on Raisina Hill. The original site of the building was pushed back by several hundred meters, which meant that the hill blocked the view and made the building look small.
Lutyen fought to have the road leveled to a long, inclined grade so the view would be unobscured. He was convinced the overall architectural design would be ruined.
He never won this battle, though, and his defeat was compared to Napoleon's at Waterloo. It would cost too much money at a time when the British were not looking to invest in building projects in India.

I have to agree with him. It's a shame that you can't see the full extent of what an imposing and immense structure lies at the end of Rajpath. It would be a sight worth seeing.
at 2:23 PM