Out of place stones 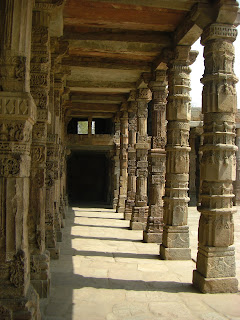 There are stones from Hindu temples at the masjid of Qutab Minar.
I find this fascinating.
Islamic architecture has the reputation of being so strict about showing any earthly forms, that much of the time, only geometric designs are portrayed. Sometimes not even animals or plants are allowed.

What is here at the Qutab goes way beyond plant, animal or even human form. These are images of Hindu gods carved into the pillars and walls around the mosque.
I can't even fathom how that was permitted. 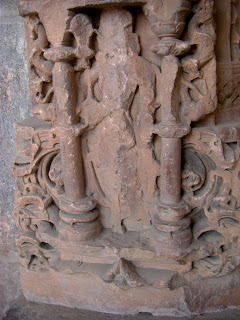 Some of them are defaced, and the features of the idol chipped away. But they are still obviously Hindu gods. 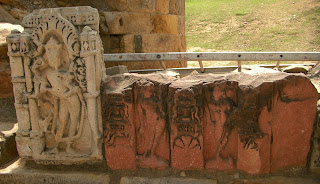 And even all these years later, they are still there.
I mean, maybe it's conceivable that the first Muslim ruler, Qutab-ud-din Aibak, didn't have time to quarry new stones and just used what was lying around from the 300 some temples that were destroyed. Conquerors around the world have done that--like the Medusa heads used in the basilica of Istanbul. Or the stones Seljuk architects took from St. John's Basilica in Ephesus for their own construction projects--those same stones were first pillaged from the site of Artemis' temple by Christian builders.
I understand the idea of using what's available.

What's amazing to me, though, is that the construction at the Qutab comlex went on for several hundred years, and some of the rulers from those times were devout, but still they allowed the stones to remain.
None of the other empires that followed had the stones removed or replaced, either.

And so, they are still there. Hundreds of years later.
I think that's remarkable, and uniquely India. 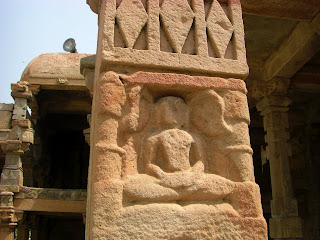