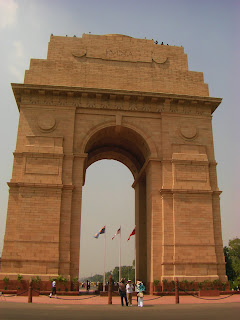 India Gate.
Yes.
It only took me eleven years to get here.

Finally, I've seen it.
Along with every other tourist who comes through Delhi for a week. 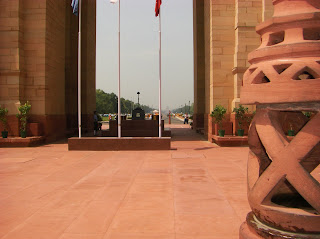 Did you know there's a flame burning at India Gate? Neither did I. And I couldn't get close enough to see why.
Though this is what wikipedia says: it's the flame of the immortal soldier. There are some 90,000 Indian soldiers who died in World War I and the Afghan wars fighting for British India, and their names are engraved on the gate. 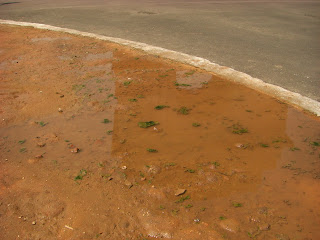 is was one of my favorite observations: the reflection in the muddy water.
Apropos.
Especially in these days of flooding, the threat of dengue fever, and the mess over being unprepared for the Commonwealth Games. 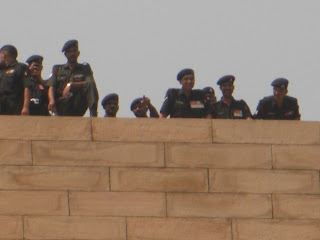 I saw the figures on top of the gate and wanted to go up there. But it seems you have to be wearing the right uniform to be allowed.
Too bad. 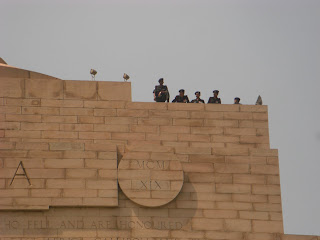 This is what the gate says on it:

"To the dead of the Indian armies who fell honoured in France and Flanders Mesopotamia and Persia East Africa Gallipoli and elsewhere in the near and the far-east and in sacred memory also of those whose names are recorded and who fell in India or the north-west frontier and during the Third Afgan War." 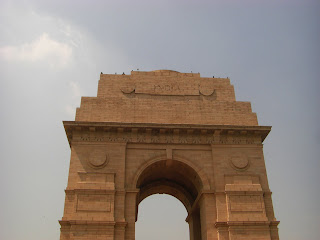