A man showed up at my door today with a slip of paper saying I'd ordered a new cooking gas cylinder.
No, I hadn't.
He had the right address, right floor, landlord's name--but no, I hadn't ordered a cylinder.
I told him I didn't need it. I hadn't order it.
But yet, there was his piece of paper that said I did.
The cleaning lady who was in my house at the time, assured the man that, no, I didn't need a new cylinder, I still had gas.
And finally, he went away.
Then the cleaning lady laughed and said, "Why would you need a new cylinder? Where would your gas have gone? You never cook anything."
Smart aleck.
at 2:07 AM 1 comments 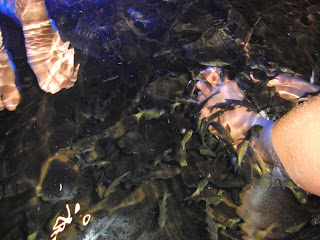 My friends took me to their favorite foot spa. The specialty of the spa are the little fish that nibble on your feet, removing dead skin. I have seen this before, watched some others do it, but never tried it myself.
I haven't tried it because I didn't know if I could bear the ticklish feeling of it. 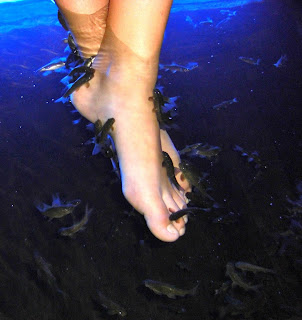 I was right: I couldn't handle it.
I couldn't keep my feet in for more than thirty seconds at a time. The feeling of those little fish nibbling on my toes was too much. And watching them en masse around my feet--ugh.
Can't.
I don't care if that gets me the label of "wimp". The world holds plenty of other challenges which I am up for.
at 2:14 AM 0 comments 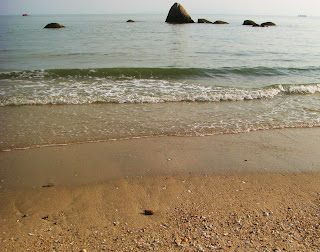 I went to the beach to hear the waves in the shells. I love that tinkling little sound.
What a nice beginning to my day.

This blog has moved

This blog is now located at http://blog.lindsaywashere.com/.
You will be automatically redirected in 30 seconds, or you may click here.

For feed subscribers, please update your feed subscriptions to
http://blog.lindsaywashere.com/feeds/posts/default.
at 11:06 PM 1 comments

Email ThisBlogThis!Share to TwitterShare to FacebookShare to Pinterest
Labels: bureaucracy 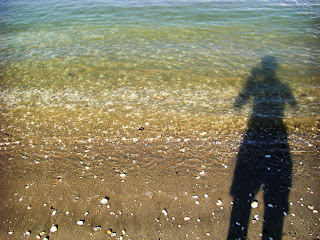 I love the beach.
I love taking pictures at the beach.
I forgot to take my book with me today, so instead I watched crabs run away from me and watched trash wash up along the shore.
Yucky to the trash.

Here are a few other things I saw... 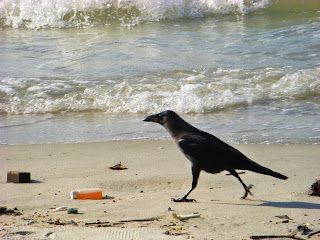 The bird who liked the trash 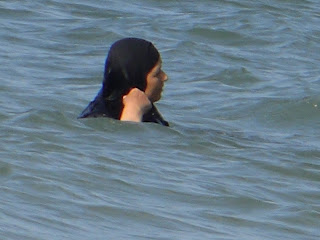 A woman swimming in full burqa 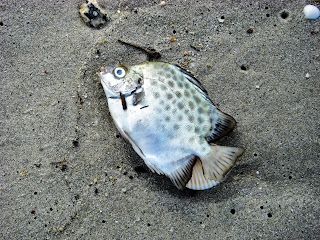 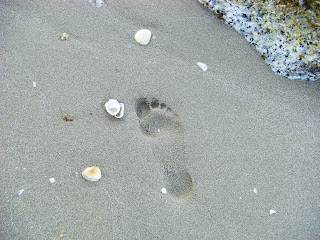 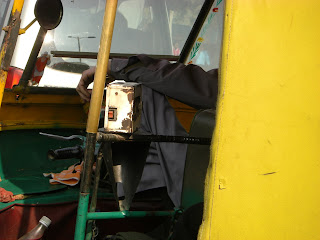 I went out this morning because I had an appointment. It was just before rush hour time, so I thought I'd have no trouble finding an auto and getting to my destination in 20 minutes or so.
Wrong.
Unbeknownst to me, the auto unions had called a 24 hour strike, making some very unrealistic demands.
I waited 30 minutes and then walked to the auto stand where I usually avoid asking because their prices are higher.
Higher, yes, and today: way higher. Three times the price!
"You are crazy," I told the driver.
He laughed and repeated what I said to the others.
"We're part of such and such auto union," he said.
Okay, great, I thought, and I told him what I was willing to pay and then walked away when they wouldn't take it.
Then I called the office where I had my appointment and asked if there was some reason autos were not running today.
Yes, there was a strike.
Ahah.
So I went back home and canceled my appointments for the day.
It's too bad, really, 'cause I imagine the roads are pretty good driving with 55,000 fewer vehicles crowding along them.
at 11:20 PM 0 comments