This is intended to build excitement for the coming Commonwealth Games.
Works for me. 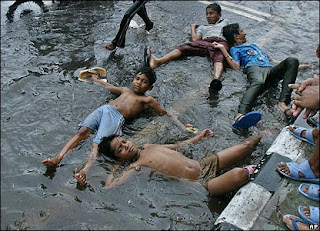 Here's a fun picture I found online today.
Swimming in the street.
At least the water looks clean, as in: not brown.
at 9:48 AM 0 comments

Rain, rain, go away
We have had enough today. 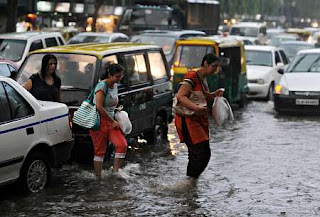 I have water spots on my wall, a window that leaks and a balcony that doesn't drain, but my problems are small.
The city of Delhi is flooding.

There has been record rainfall for this month. The rain is still coming down. And the waters are rushing down the river toward us. 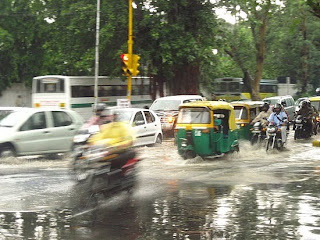 For those who live on the streets, there is no dry place to sleep.
I am thankful for my dry home.
at 10:15 AM 0 comments 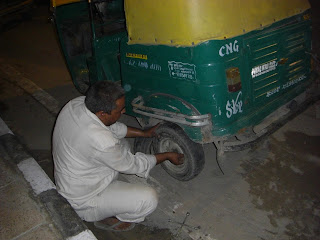 Here's a new one: auto with a flat tire fixed while I wait beside the road.

Traffic can be harrowing--that's nothing new. So the other evening when I was out, my auto driver had to swerve to the edge of the road as another car pulled in front of us to make a left-hand turn.
Going off the road punctured the tire.
We pulled over and the driver got to work changing the tire.
"How long will it take?" I asked.
"Ten minutes."
"Ten minutes? For sure?"
"For sure, madame."
So I stood by the side of the road waiting for him to finish. I had ample opportunity to leave him there unpaid as many other auto drivers saw our predicament and wanted my business.
When it came time to lift the auto and remove the old tire, the driver hailed another auto and asked for help. Together they tipped the auto up and he propped it on its side to finish the job.
Sure enough, he was done in ten minutes and off we set again.
All in a day's adventure.
at 9:17 AM 2 comments

The Commonwealth Games are coming.
They've been coming for several years now. The countdown dealy says there are 43 days, 6 hours and some left before they begin.
And I am beginning to be excited about this. It's probably kind of crazy to be excited--it's going to turn the city upside down. It already has in so many ways: construction, construction everywhere.

Today I found this article about the tennis competitors from India. It contains an amusing phrase: "India's revolting tennis players". Ha ha. I think the newspaper editor should have paid better attention to that one.

I've been making plans to attend some of the events. It's a once in a lifetime opportunity, right?
Are you familiar with lawnbowling? Me neither. I might go check it out.
Otherwise, I'd like to see some of the diving and the track and field events.

It's after midnight here, but the exciting news is that I was finally issued a PAN card!
At least I was notified that I was--and that was after midnight, too--and that it is supposed to turn up in the mail.
My notification stated:

The Income Tax Department takes pleasure in informing that a PAN has been allotted to you.

Pleasure, huh?
It only took five months and two tries ("seven to ten days", ha!).
Such efficiency don't you think? Especially for people who want you to pay the taxes that pay their salaries.
at 2:50 PM 0 comments

I know it's nowhere near Thanksgiving.
I'm not sure it's "permissible" to link to a hallmark ecard, but this is one of my favorites of all time.

Check out what Sir Thomas the Turkey is thankful for.
My favorite: "He is like a angel."
Ha ha ha.

I got a message from a friend the other day. She was updating on what has been going on in her life and at the end she wrote, "He's so wonderful."
God, that is. He's the wonderful one. Her sincerity made me smile.

Anyhow, I liked the way she nonchalantly threw it out there, "He's so wonderful," as if she was talking about a friend. Someone she knew. Like she might also say of some friend she met, "He's so cool."
It was genuine.
And true, unlike the turkey's ascertainment of the farmer.
A very happy reminder in an often cold and dark world.
at 1:23 PM 0 comments

My Hindi teacher informed me today that this was a good commercial to watch because it contained so many different verb tenses and a piece of Indian culture. She was disappointed to hear I had no tv.
But youtube is a wonder...

Guy requests a piece of chocolate.
Girl: Do I know you?
Guy he shakes his head.
Girl: Then...?
Guy: My mother told me that before starting anything auspicious, it is a must to have something sweet, so as to be successful in the task.
Girl: What auspicious work are you planning to do?
Guy: I was thinking to take you home.
at 7:56 AM 0 comments

The turned down sheets service 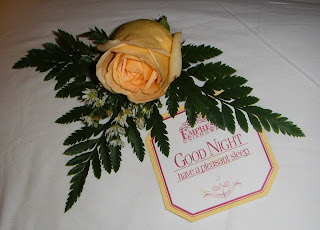 The hotel I am staying at wished me a good night with turned down sheets and a rose. How nice. :) 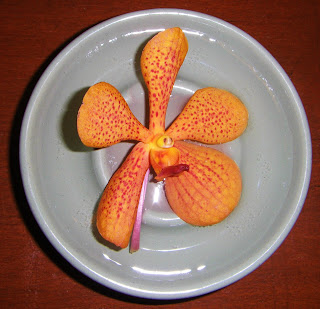 And not just the first night, either. They bring new flowers every evening, and they turn down the sheets. 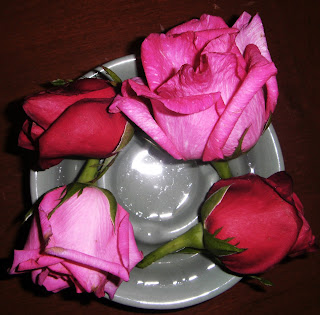 Have you tried durian?
If you have, then you probably know how it smells.

I must say that the first time I tried durian, I didn't notice the smell at all. We were out on the streets of Thailand in a rather pungent market area and everything smelled somewhat unpleasant. My friend and I had been walking down the street and she would buy one fruit after another and give me some to try. She is a fruit-lover and was in heaven in Thailand where sweet, ripe and colorful fruit is abundant.
So we were walking down the street and I tried all kinds of things I'd never seen before.
Yes, there was a bit of mischief in her look when she handed me the durian, but I'd never before heard of the stinky fruit. I trusted her and bit into it.
I know it's odd that I didn't notice the smell. But what I did notice was it's similarity to muskmelon, which I don't care for. The others with us were disappointed with my reaction--or lack thereof. 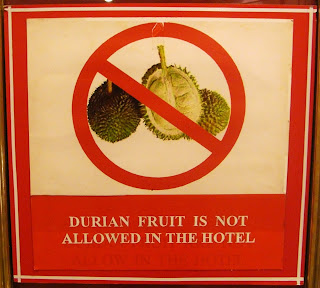 Here in the hotel where I am staying, durian is not allowed. It's too smelly for this professional, clean establishment.


Speaking of things not allowed, I have a tangent:
On a recent flight, there was a girl who sat near to me. During the flight she got up and went to the back. After only a few moments she returned and whispered to one of the flight attendants. "No," he loudly replied, "This is a non-smoking flight. There is no where for you to smoke."
"Where are you from?" asked another attendant.
"Russia."
"Ahhh," the flight attendants nodded and looked at one another, "Most flights throughout the world are now non-smoking. It is banned internationally."
I didn't know Russians were unaware of this. Or that they could smoke on their airplanes.
Huh.
at 1:04 AM 0 comments