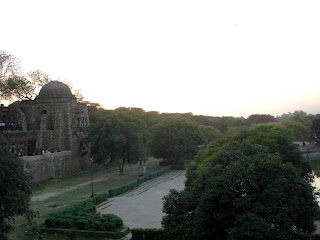 So there are a lot of tombs around Delhi.
But the ones here in Hauz Khas are in a location I would consider unusual. I guess that's because I wouldn't consider a college campus the best place to build a tomb.
But that's exactly what Firoz Shah Tuglaq did.

He liked the water tank that Alauddin built here years before--Haus Khaz means 'royal tank', so he had the tank repaired and built up a madrasa around it.
Then before he died, at 80-something, he built his tomb here, too. 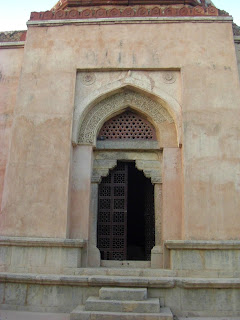 The tomb is one of many in the area, but Firoz Shah's is typical of other buildings from his time.
They were strong, sloping, and square--kind of like a fortress. Maybe the architects had fortresses on the brain because during this time period their empire was threatened by invaders.
Instead of using sandstone, the buildings were covered with plaster. And maybe that's because the money was being used for defenses instead of building projects. Or maybe all the skilled stonemasons were moved away in one of the population comings and goings of war time.
It was Tamerlane (Timur the Lame) who eventually invaded the city, and the madrasa, water tank and many other places were destroyed. 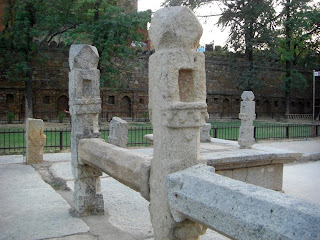 The unique thing about the tomb is the stone fence around it. No other tomb in Delhi has such a feature. 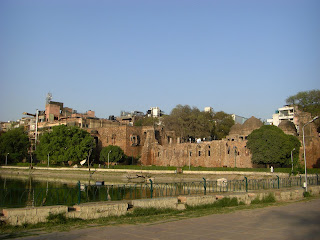 Then there's the madrasa.
These days young people like to hang out on the walls and watch the sunset over the water.
But back in its heyday, the madrasa at Hauz Khas was the place for studying Arabic and the Quran. Students came from all over to study here on the upper floors, and to stay in the dormitory cells beneath. I wonder if the view of the lake and garden distracted their attention from the lectures.

The tank is now less than a quarter of what it used to be, and it still seems fairly large.
In the 1300s, it must have been nice to take a stroll along a lake on the far outskirts of Delhi. Now it sits squished into one of the busiest areas and it's hard to imagine it as the quiet place it once was. 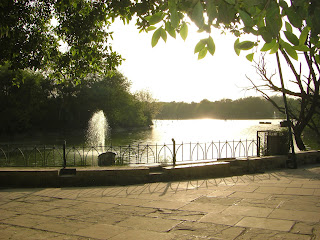