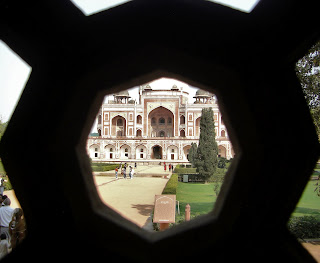 If I'm visiting an already-been-there place, I like to be sure to still see something and learn something new--or to help someone else to.
To see the place through a new view.

This time around, I read up on who Humayan was.
The son of Babur of the Timurid dynasty, he was a slight disappointment as a warrior. He preferred books, poetry and art (and opium).
It was probably these preferences that caused him to loose his empire and flee to Persia when one of his rivals defeated him in battle.
In Persia, though, he made friends and gained a whole new appreciation for design and gardening.
After fifteen years, he returned to Delhi and took back his empire.
For a while anyway, 'cause it's rather anti-climactic that he died within a year. There are several versions of how he died; here are three:

1. Humayan was standing on the roof of the library at his palace when he heard the call to prayer.
He rushed down the stairs to pray.
Fell.
And died.

2. He was reading a book as he descended the steep stairs of his library.
Fell.
And died.

3. His habit of using opium did not help his balance on the steep stairs.
So he fell.
And died.

So Akhbar and Haji Begum built the magnificent tomb. 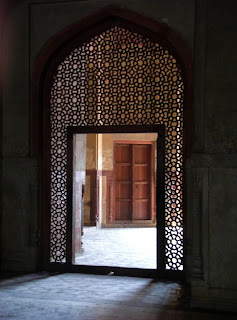 It was the first of it's kind, heavily influenced by Persian architects.
It was the first use of marble combined with red sandstone (meaning very expensive). No cost was spared, as the statement made was meant to be: this is the tomb of not just any man, but an emperor.
And it was the first tomb to be built on a raised platform--which was later perfected in the design of the Taj Mahal. 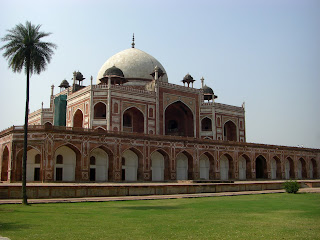 Design was an integral part of what the Mughals left behind in India. They especially had a thing for symmetry.
As I learned this time around,
the back of the tomb is pretty similar to the front. Symmetry at work.

Right.
So there's your history lesson for Humayan, who he was, and why his tomb is so grand.
at 1:13 PM