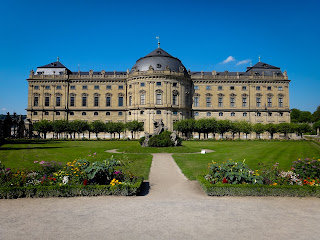 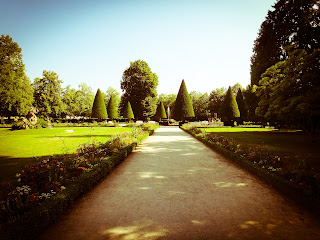 Building was begun on the Residenz in 1720.  The owner wanted a palace big enough to show that he was an absolute monarch.
It is full of Baroque and Rococo architecture and painting.  One of the things I like about Rococo is how art interacts with it's surroundings.  Swords in paintings come out of the wall.  A man painted on a ledge, actually sits on a ledge.  A curious cherub statue touches a nearby light fixture.  There are no frames composing boundary lines.

Today, most of the original Residenz splendor has been reconstructed, as the building was destroyed by fire in 1945.  "From the attic the fire ate down through wooden ceilings and floors, and all the furnishings and wall panelling which had not been stored elsewhere were devoured by the flames. Much of the furnishing and large sections of the wall panelling of the period rooms had been removed in time and thus escaped destruction."
One of the few things not destroyed at that time was the beautiful staircase and it's ceiling painting--supposedly the largest fresco in the world. 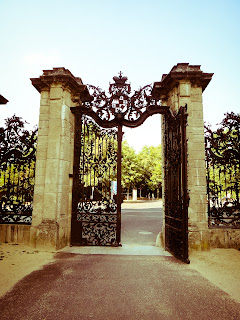 My pictures are all from outside the building and in the garden.  Inside you're not allowed to take pictures. 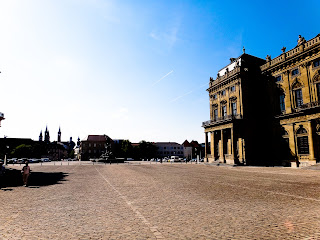 Which is too bad, as it is beautiful.
The famous staircase, the green room, and the room of mirrors being my favorites.
I suppose you'll just have to go see them for yourself.
at 10:23 AM