Mummy on the stairs 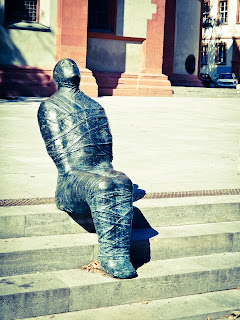 When I came upon this strange statue sitting on the stairs of the Kilianplatz, I was intrigued.
What did it mean?
What was it doing there?

As there were no signs to mark it in any way, it took me a while to locate the information that it was a work of Maria Lehnen, called Großer Sitzende (Big Seated).
Still, what was it doing there all by itself?

Then I came across a website with a story.
I'm not sure how true this version of the origin of the statue is, but it claims the Big Seated was put there by the museum next door. They had redesigned the square outside their entrance next to Dom St. Killian and added stairs.  The city decided the stairs were dangerous to pedestrians as they were not well marked and told them to put in a railing.
But a railing would ruin the aesthetic appeal. Instead, they added this statue.

The bound up man seems to be a way of following the letter of the law, but not the spirit.
at 10:22 AM