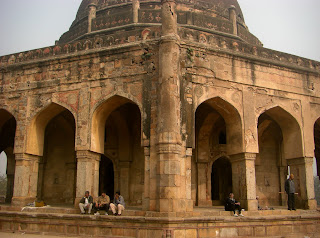 This sightseeing trip goes with several different versions to the story.
And you can pick and choose what to believe.

Here we have the tomb of Adham Khan.
Popularly it's known as Bhool-bhulaiyan--because of a maze-like stairway. (Really? I guess I must have missed that. It all seemed pretty straightforward to me.)

Adham Khan was one of Akbar the Great's (of Fatehpur Sikri) ministers, or maybe he was a general-- depending on your source--the son of Akbar's wet nurse, Maham Anga. 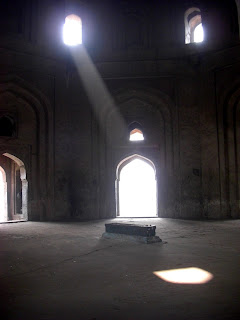 He did not get along with another of Akbar's ministers--Atgah Khan.
Jealously, power struggles, durbar intrigue--the usual Mughal history drama.
So anyhow, one day while they are at the Agra fort, Adham, who seems to have been known for a pretty short temper, get's mad at Atgah and kills him.

As soon as he hears about it, Akbar (also not very restrained) knocks Adham senseless (according to some), and has him thrown off the ramparts of the fort.
Then he has him thrown off again, because Adham wasn't dead the first time.
About forty days later, Adham's poor, sad mama Maham Anga dies of grief. Then someone finally shows some remorse in this saga of tempers and killing, and for dear, deceased aunty's sake, Akbar has this tomb built for Adham in Mehrauli. 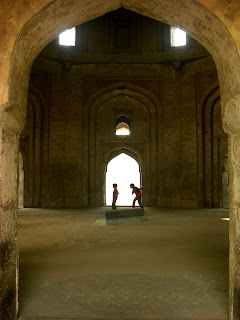 Atgah, on the other hand, got to be buried next to Saint Nizamuddin, in a small but "blessed" repose.

For Adham, though, rumors of ill-omens float all around his massive burial chamber.
Some say its unusual octagonal shape (most tombs of the period being hexagonal) was done on purpose as a punishment.
Another saying is that some spurned lover of Adham's cursed his tomb saying no woman would ever visit, so women still avoid it, fearing it will bring bad luck.

Who knows.
Some truth.
Some legend.
Some piece of history standing on a street corner, waiting for a curious passer-by to wonder.
at 1:02 PM