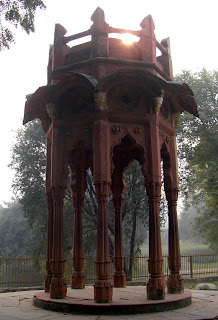 . Now it sits in a corner of the complex.

In 1828 there was an earthquake and the tower got damaged. When the British repaired it, the engineer, Major Smith, had this cupola added to the top to replace the damaged one.
Twenty years later, Lord Hardinge decided it didn't fit with the rest of the architecture and had it removed.

Now it stands way out of the way, it's own little bit of story unnoticed by most. 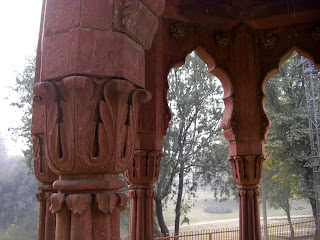 The detail of something that was meant to be so far above eye level, unable to be seen by most is kind of magnificent. Like finding a treasure.

Another little gem about this cupola is that while standing way over here in the corner, the whole minar finally fits in a camera shot.

I find that the stories about the Qutab are taller than the tower itself.
That's kind of magnificent, too.
at 2:30 PM