Here's my evidence for why Metcalfe must have been a peculiar fellow. (If living in a tomb is not enough evidence already.) 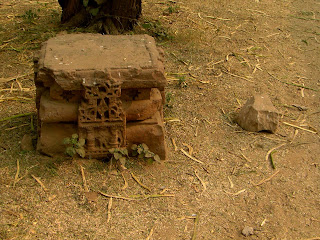 Back in the early 1800s, it was all the rage in England to construct follies in one's garden. Fake ruins, making it look like you had a piece of ancient Greece on your property was soooo cool.
It seems Thomas Metcalfe agreed. And he added follies to the design of his garden at Dilkusha.
A cracked piece of carving here next to the roses. An over turned pillar cap there beside the jasmine tree.
A ziggurat at the end of the lane. 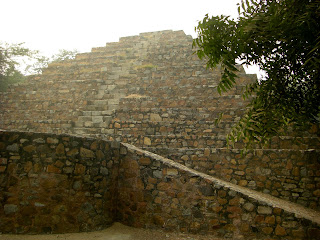 Seriously, who needs a ziggurat?!
I can just imagine him giving directions to some friends invited to an evening lawn party at Dilkusha, "Turn right at the ziggurat, it's the end of my driveway."

He was surrounded by the real stuff. He was living in the shadow of this, the Qutb Minar!
Why in the world did he think he needed to build more? To build fake stuff?
I think that is very peculiar, Sir Metcalfe. 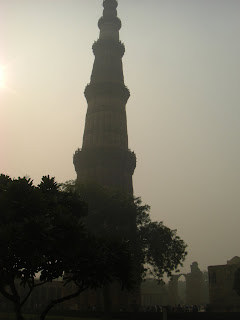