Yes, my tickets to the Commonwealth games events include passes on the metro. But is it worth it?
Is it worth--
I had this idea, silly me, that the shuttle ride from the metro station to the stadium would be, well, a shuttle.
Wrong.
It was the average India bus experience.
We queued for the arrival of the bus in men's and women's lines, but when the bus pulled up it did not line up with our queues and people made a mad rush to get on.
I'm not an aggressive person.
In about forty seconds, the 743 (you know, estimate) of us waiting to get on the bus were on the bus.
Except me.
I was still standing there.
The CWG helpful-guy-in-uniform said to me, "I'm sorry, you can catch the next shuttle."
After I'd already been waiting there fifteen minutes and just missed the last one--I was at the front of the line, even! "My Aunt and Uncle are on that bus," I replied, referring to my travel companions.
The helpful guy turned to the man with his leg sticking out of the bus door that could not close. "Move over, she has to get on the bus," he said.
And they moved.
There's always room for one more.
Last passenger on and off we went.
But where was the a/c for the hundreds of us crammed in there? Not turned on. 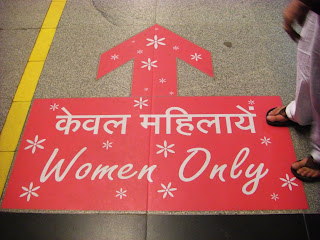 One awesome thing I discovered: there are cars on the metro trains reserved for women only.
Wow is that a breath of fresh air. Literally.
at 9:53 PM