I was studying up on the artist Matisse this week.
Lying in bed for long stretches of time changed his life.
Twice.

The first time was when as a lawyer he had appendicitis. Stuck in bed for a year (sheesh! what a recovery period) his mother gave him some paints to help pass the time.
Lo and behold, turns out he was pretty good at it.
So he left the law profession behind and took up art. 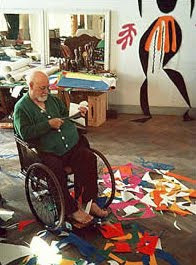 hen again, after surgery later in life, he could no longer stand at an easel. Instead he developed a technique he called "painting with scissors". He cut out shapes and was a master at putting them together to achieve balance, contrast and movement on a two dimensional surface.
He was pretty good with a scissors, too.

Matisse has inspired me to get back to painting that wall in the guest room I never finished.
Maybe.
:)
at 10:05 AM