What is the steeplechase?
It's running around the track (3000m worth of running around) and jumping over these hurdle-like things.
Wikipedia gives a much more comprehensive explanation than I do, but I will quote the interesting name-history here:

"The event originated in the British Isles. Runners raced from one town's steeple to the next. The steeples were used as markers due to their visibility over long distances. Along the way runners inevitably had to jump streams and low stone walls separating estates." 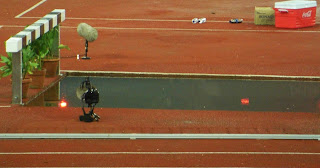 n the modern steeplechase, one of the obstacles is jumping into a pool of water, like this one.
That's no small feat. Just look how deep the water hole is when there's no water in it: 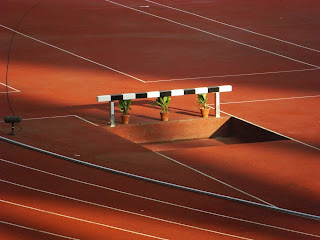 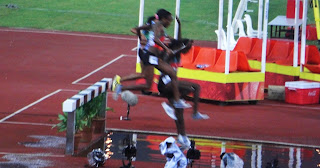 The Kenyan women were super good at it. They owned the steeple chase.
1-2-3.
Gold-silver-bronze. 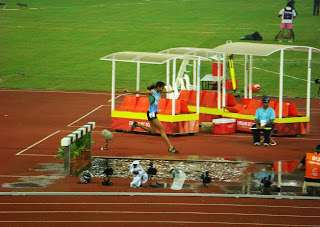 he determination of this Indian athlete deserved respect.
Early on she fell behind the others, but she kept on and didn't tire in her graceful leaps over the hurdles.

She wasn't the only one who had difficulty. Apparently a Papau New Guinea steeplechaser was so tired he had to use the potted plants to help him climb over the hurdle.
at 9:06 PM