I think one of the coolest things I saw during the games were the moments when India won medals.
It was unexpected, for me anyway, because I am not a sports fan and I do not follow what happens in the world of sports.
So anyway, when I think of discus throwers, I think of great, big Scandinavian men. Lumberjack types.
India does not come to mind.
I consider myself to be of average height, but here I am taller than a lot of the men. 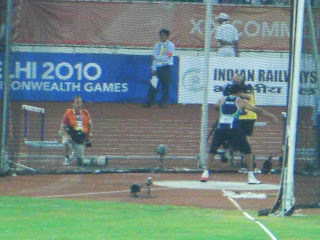 o discus throwers.
Great, big guys who can spin and throw things.
I know there's technique and all that, but frankly, it was a huge auditorium and they were all the way on the other side. Difficult to see what was going on.

I would be watching something else and all of a sudden a cheer would erupt at the other end of the stadium.
What was going on over there?
Oh, the Indian discus thrower.

Well he was pretty good at throwing that discus, because he took silver. A 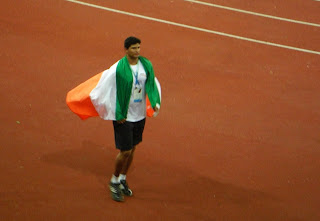