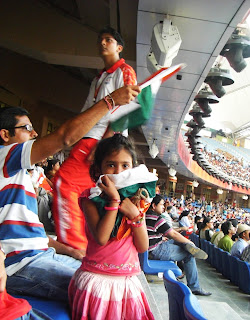 I'm going to submit the idea that India needs lessons in how to cheer.
As we were sitting in the stands, my friend said to me, "Shall we start the wave?"
"If anyone else around us knew what we were doing, we could," I answered.
'Cause, seriously, we would have been the lone wavers, entertaining those around us.

But really, I'm not talking about entertainment.
I'm talking about supporting these athletes who are dedicated to excellence in what they do.
Yes, it's true there are others in the world who are better at running, jumping, swimming and other feats of athletic prowess, but if India wants to be the choice for Commonwealth Games and (can you imagine) Olympics, then it requires more than big stadiums.
It requires a shift in thinking and respect for athletes of all types.

There were Indian runners in almost all of the athletic events: the 400m races, the hurdles, the relays.
But they weren't usually the fastest.

Like this girl who fell so far behind her fellow runners that when she came by, the people sitting next to me were actually laughing at her. At first they had been loudly cheering her at the beginning of the race.
Until they saw she had no chance to win.
This happened more than once, to different athletes in different events from spectators around the stadium. When it did, you could see the runners loose momentum as the cheers died away and they realized they were failing the crowd.

Come on, India!
It's not always about who is the biggest, and most powerful. Every one of these athletes has worked hard to get where they are, and they deserve some respect when they are giving all they can.
Sometimes you cheer for the underdog and sometimes the unexpected victory over the favored champion makes for a more heroic story. But those heroes don't get born if there's no one to cheer for them. 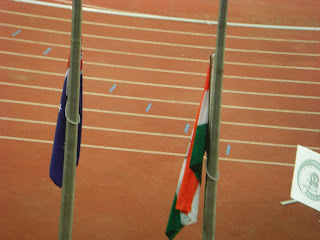 f you want to see this happen more often (the Indian flag raised and carried around the stadium), and hear the anthem of India played for athletic champions, you have to cheer them on ALL ALONG the way.
Even if it seems they're losing.
They won't always loose. Sometimes they'll win. But it may be a very small victory, which you'll miss if you're only looking for the super big winners.
at 8:27 PM

I agree wholeheartedly. It would have been hard to see & hear the laughs. Anger would have risen in me in response--(I need to work on self control:-) I have seen the cheering help a team that was behind & against the best, win. I've been a part of that cheering having people beside me complain while I continued to yell & encourage till I was almost w/out a voice. I've had people move away from me as I've been yelling for the team. And I've had people finally join me in encouraging. You keep cheering Linz. Cheer loud so they know you believe in them. Encouragement is contagious!

That is so sad that they were actually laughing at her, instead of honoring her effort.