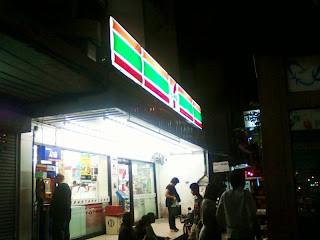 Thailand loves its 7Elevens.
I wanted to go get some potato chips the other day and upon reaching the main road was uncertain of which direction to go...
Left?
Right?

But silly me--a 7Eleven is never far away and I would have found one in either direction. And there would be another across the street from it so I wouldn't even have to worry about maneuvering through traffic.

There are certainly more 7Elevens in one square block than what I grew up with in driving distance from my home.
Out of curiosity, I checked and this is what wikipedia says about it:
There are 5,409 7-Elevens in Thailand, half of which are in Bangkok, making Thailand have the 3rd largest number of stores after the US and Japan.
Huh, don't count out the Japanese, I guess; they love 7Eleven, too.
at 9:20 AM

uh, you grew up with no 7-elevens within a driving distance of your home. unless you're talking about a 20+ minute drive. so anything is more than nothing. :P

Right. That's what I meant. I never went there, did you?
Do you now?

I did not know that. I wonder if it's true in Thailand.