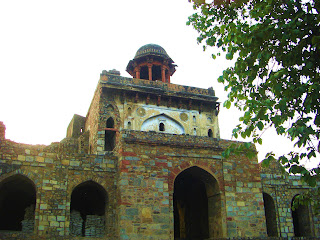 This is the Talaqi Darwaza, "forbidden gate".  It's the northern gate of the Purana Qila 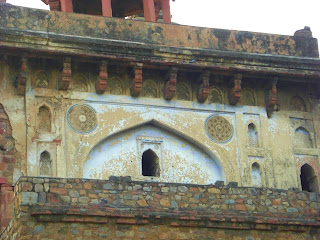 It's been unopened for a long time.  And there's a story that goes along with why the gate is kept closed. 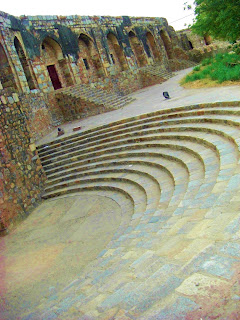 They say that the king went out to battle through this gate and said to his subjects not to re-open it until he returned victorious.
Sadly he never returned alive and so the gate was kept closed to mourn his death. 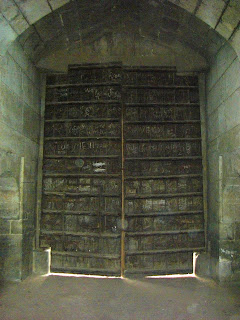 The problem is that it's historically implausible.

The only kings ruling from this fort were Sher Shah and his son.  Neither of them went out to battle and died.
And Humayan, well, his death was a different story all together.
at 6:03 PM

Ahhh...I love India and all it's folklore. So then...why is it locked? They mystery will continue.

Who knows. Maybe the chowkidar lost the key.

'talaq' means 'divorce' in english. The tale tells something like this- all the wives of the men who went out from that gate to fight the battle told their men that if they do not return victorious, they will be divorced, and since the king lost, the gate was closed forever as the king had ordered and was named as 'talaqi' darwaza.

Hm, that's an interesting version of the tale. It fits better than the story of a king never returning.