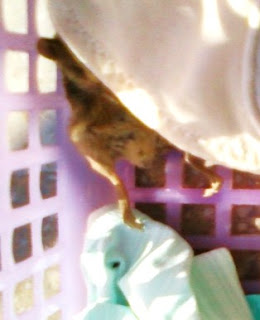 This is what I found this afternoon.
The smell led me to it.

About a month ago, Daniel and his family visited me. With all of them in the house, things got stirred up and the mouse that had taken up residence in the library was disturbed. He began exploring other places in the house and Daniel and his brother would spot him in different locations throughout the day.
Eventually, I saw him, too. Running under the washing
machine. Sneaking out of the closet. Leaving evidence behind of where he had been.

"I know Robert has to die," Daniel told me (he had named the mouse Robert), "But don't tell me when he's dead."

Okay. So all of you reading this: don't tell Daniel.
Robert the mouse has departed.
Leaving his decomposing remains for me to dispose of.

I smelled something rotten in my closet and, yes, it was Robert. Dead among my socks and other unmentionables.
Oh does decomposition stink. Yelch.

I hope Robert has no relatives looking to move into his vacated place. It's not available.
at 5:55 AM

hahaha - I can just see you having to dispose of that!
At least it wasn't a bat!

gross! glad it happened before we got there :)

Oh wouldn't you have liked him live, wandering around the house and through the guest room? ;)