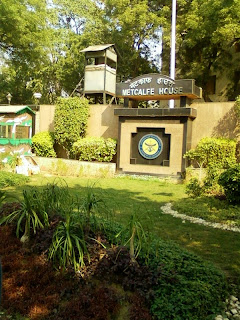 To take this picture, I deliberately disobeyed the "photography is prohibited" sign.

All I wanted was to see the Metcalfe House.
Really.
I would have been content with just a glimpse of the rooftop from the other side of the gate. But it didn't go quite the way I had anticipated.

After seeing Dilkusha and reading stories about how Sir Metcalfe's house in Delhi was the center of high society during his time, I was curious.
I had read that nowadays it is the Defense and Research Development Organization and people are not allowed in. So I expected not to be let in.

I suppose the idea I had in my head was viewing a great, big mansion from the opposite side of a well guarded fence.
Like this: 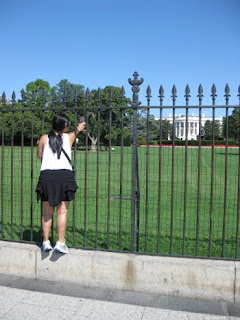 Wait, Sir Metcalfe was British.
So more like this: 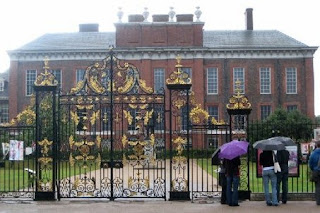 And then I would have been satisfied.

Instead, this is how it went down:
We arrived at the imagined well-guarded gate and were asked where we were going.
"To see the Metcalfe house," I replied. And he waved us inside.
!
A quick picture from inside the gate has got to be better than any view from outside the 12 foot walls.
Everything inside the gate, though, just looked like big, ugly office buildings. Where was this mansion?

So he went and got someone from higher up.

The next man spoke some English. He wanted to know which department we were visiting or who we had come to see.
No one, no department, I tried to explain to him. We just want to see the Thomas Metcalfe house, to see what it looks like from the outside. We will look at it, I said, and then we will go.

That made no sense to him. We were in the DRDO, after all, where people are engaged in the research of new technologies for defense and research. We must have had some other purpose for being there.
And of course, they weren't going to let us in--I didn't even mind that--I just wanted to see where Sir Thomas Metcalfe lived.
I rephrased our request as many ways as I could think of, but I was not getting through to him.

Finally, we gave up and went back out through the gate. If the mansion is still in there, it's buried among ugly buildings and bureaucracy.
It was not the adventure I expected to have, but it was adventurous, nonetheless.