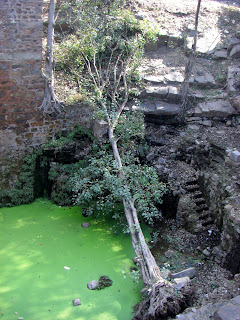 Hooray for sighting another baoli!

The Hindu Rao baoli has certainly seen some damage.
It could be from lack of upkeep, or it could have happened in the battle of 1857. 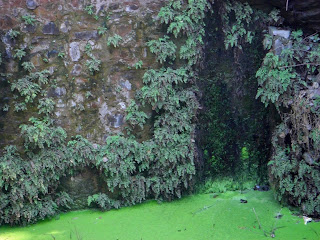 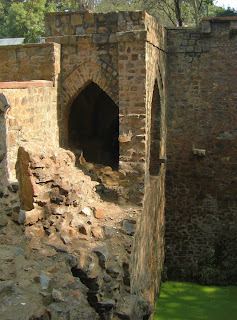 Even so, it has a nice green color and I would have been sorry to miss it...as we almost did.

From atop the Pir Ghaib, I looked all around for where the nearby baoli I'd read about was located and couldn't find anything.

As we walked out, a woman asked me if we'd gone to see the Ashoka pillar nearby. Yes, we'd already seen that, I told her.
"And the baoli?" she asked.
"No, where is it?"
"It's down the road and on the left."
"Oh further down the road. Good. We will see it."
"You want to see it?"
"Yes."
"I will come with you. I have the key."
The key! Ohoh! How marvelous the holder of all the keys was standing here before us, or we never would have gotten in, even if we had found the baoli!

But because we had met her, she walked with us, opened the gate and told us to look all around.
All around is what she said, and you know, there are not many safety precautions taken in places around here. I easily could have ended up in a pit of green slime.
And that's what the police officer who stepped in also worried. He came inside the gate and scolded the keeper-of-the-keys: "Don't let them go there or there. It may give way and they will fall."
No worries, man, I do not want to fall into that.
Nor did I want to get the nice, key lady in trouble.

So we looked around, took pictures, thanked her and moved on.
One more Delhi baoli: check.
at 11:56 AM