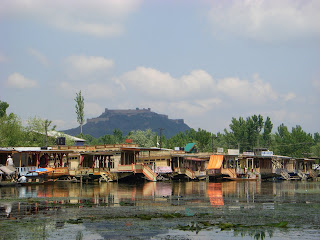 A clear sky will show Hari Parbat in the background of Dal Lake.

The current fort is only about two hundred years old, but the hill has long been thought by Kashmiris to be both sacred and strategic.

The legend goes that the hill was once a lake where a huge demon lived. The goddess Parvati became a bird and dropped a pebble its head, which grew until it crushed the demon. And so it became the hill it is today.

A hill full of all kinds of religious and military structures: gurudwaras, temples and mosques. The fort until very recently has been occupied by military and closed to the public.
Maybe now I can someday see what kind of view there is from up there...
at 8:20 PM