Due to the comment on a post from last week, and because I had an egg in the fridge which was so old that it was beyond the point of risk-free eating, I decided to try something.

Is it possible, I wondered, to fry an egg on my balcony? 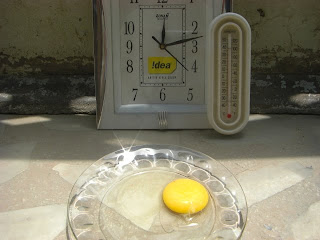 I began my experiment at 12:12pm. With an egg, a plate, and a thermometer.
At that time it was about 102 degrees F on the balcony. 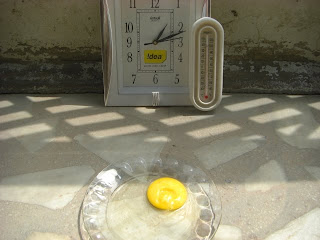 :12pm.
An hour later I looked at the egg.
No progress. 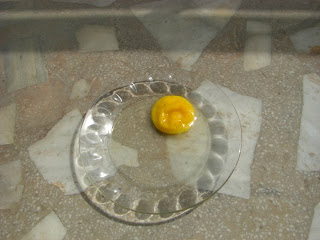 :12.
So the egg no longer looked quite the same. But it also didn't appear to be "cooking".

While this experiment was going on. I tried to get some other things done around the house. You know, some work, or something.
I admit to distracting myself with thoughts of other fun egg memories. :) 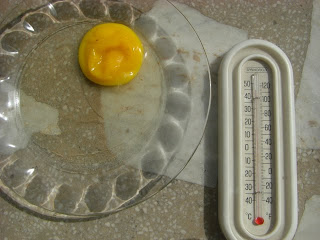 :12pm.
So now the thermometer said something like 113 degrees F. Is that hot enough to start cooking?

4:12pm?
What happened?
Well, this is when life caught up to me and I was sucked in by the tyranny of the urgent. I had to leave the house, and I had to leave right away. So the egg was left to fend for itself while I was away.
During the four hours I was gone, there was a dust storm. "Aw man," I thought from the other end of the city as I licked the dust from my lips, "There's an egg on my balcony."
Then there was a short thunderstorm. Poor exposed egg. Certainly not a sterile testing environment. 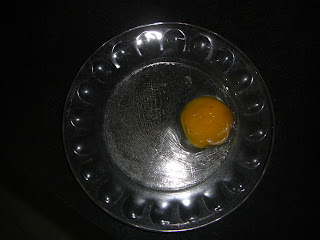 8:12pm.
When I arrived home, I checked on the egg.
It was out there in the dark.
It did not look to be cooked, but it was definitely not in a liquid state anymore. The egg white was "crystalized" (what else would you call it?), and the yolk was sort of crispy.
So does that mean it was cooking or got dried out?
Is it a dehydrated egg?

This is perhaps an odd thing to post about, but, uh, now the question is answered.
Maybe.
at 2:06 PM

i think congealed would be better word than crystalized

But it wasn't gooey, like a congealed substance. It was hard and I could tap my finger on it.