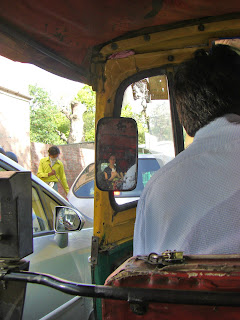 I think there are new rules I don't know.

When I went out the other day, the auto rickshaw driver was very willing to go by meter.
That's an unusual thing.
I also noticed that other drivers were taking more care than usual to make it look as if they were using their meters--actually turning them on.
This driver that wanted to go by meter gave me some explanation of how much it would be per kilometer and we set off. (I just pretended to follow what he was saying.) When we arrived, the meter said 42 rupees, but I knew he would want more than that, so I pulled out 50 for him.
No, he wanted 70.
70!
For this short distance?!
He gave me his fare calculation explanation again, but our math came up with different final results.
I dislike these arguments with drivers and how they get me all upset about being cheated. So I gave him another 10 rupees and walked away.

When I arrived home, I searched for some news about auto fare changes (this is one of those times when I think it might be a good idea to subscribe to a newspaper), and found very few articles. Most of them saying there probably will be a fare hike, but the rates are uncertain. And one article that said people were angry about the changes.

I know that I usually pay way more than the actual fare as it is. So it is my hope that the prices I am used to won't change too much.
Although I'll have to come up with a new bargaining line for a while, because I usually say something like: "By meter it's only this many rupees to go there, so this much more is a good price for you."