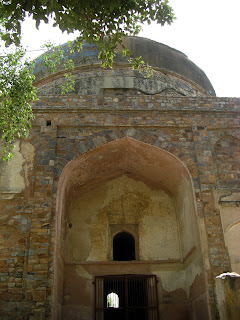 The blue dome thing is something I've seen over the walls of Humayan's tomb numerous times.  I have wanted to go see it, but it falls outside of the walled complex of the tomb.

So I went searching.
For the blue dome thing.  And really, that's what it is.  Nila Gumbad means blue dome.  A conveniently easy name to remember. 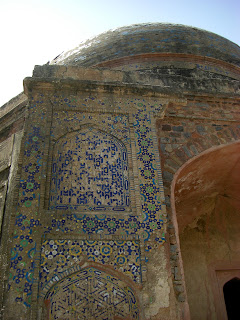 It was built about 75 years after Humayan's tomb by Abdul Rahim Khan-I-Khana (another guy whose tomb I have to go search out), one of Akbar's courtiers.  Abdul built it for his servant Miyan Fahim who grew up with his sons and later died in battle with them. 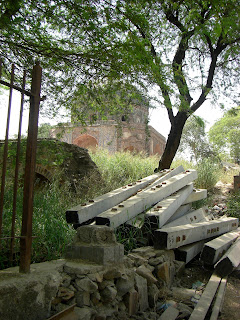 Abdul thought Miyan's tomb was important, but the world now doesn't seem to care.
The tomb sits near the railroad tracks and is surrounded by a wasteland of railroad ties and other trash.

Humayan's tomb and all it's well-kept glory is just right there nearby.  But the blue dome thing is outside it all.

Maybe something will be done about it.  Yet, history, it seems, doesn't care to preserve every story, even when we build giant tombs to remember them.
at 3:12 PM