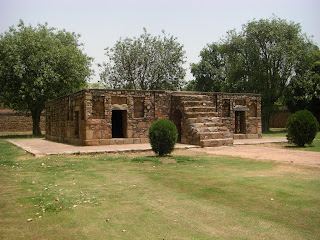 Every time I go to Humayan's tomb, I mean to look for Bu Halima's tomb in the complex.  Somehow I always miss it.

So this time I was more intentional.  I made a point of searching it out.
And when I found it, I realized why I'd missed it time after time.  Because it looks like something that's not finished.  Where's the top of it?  Where's the dome?  Where are the arches?  What about the marble work?  What are the stairs for?

But, you know, since it was on my list of destinations, I went to take a closer look. 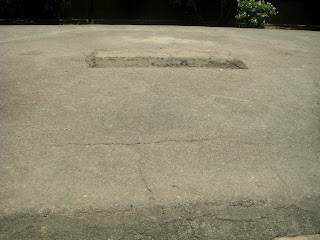 This is it.
A slightly raised bump in the platform.  Bu Halima's tomb.
Okay.  I've seen it.  Check.

Who was Bu Halima, anyway? 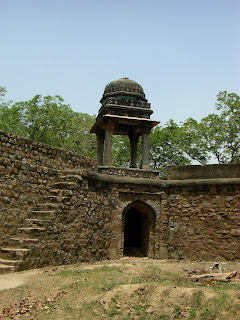 The walls of the surrounding garden and the chatris are more fun to climb on.
You can get away with climbing on a lot of things in India that they would not let you in other places.
But then, there's a whole lot more stuff to climb on, too.
I like that.
at 3:16 PM