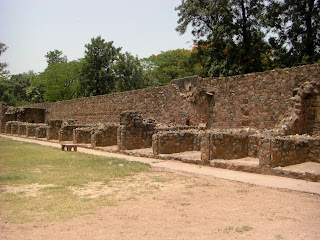 At one time--amazingly--the area of Humayan's tomb was undeveloped forest, well outside the gates of Delhi's sultanate.  You'd never imagine that now, with the bustling Nizammudin neighborhood and the railway around it.

But yes, once upon a time there was nothing there.

Yet, it was on the route between two important places, Agra and Afghanistan.
And someone decided that it was a good place for a way station.
And thus the Arab Serai was built up and extended into Mihr Banu's market place.

A place for travelers to rest.  A market place to resupply.  A water source to refresh.  It would have been a busy place, full of people of all kinds. 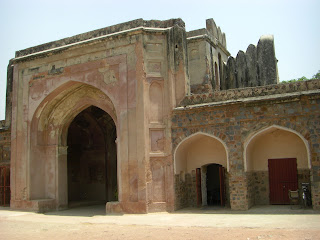 Today the impressive gateway to Mihr Banu's market is at the far southern end of the complex of Humayan's tomb.
And it's empty.  Few remember or visit. Travelers have other places to stay, and not many are on their way to Afghanistan.

Because it was near the holy place of Nizamuddin's dargah, Akbar and Hamida Begum decided to put the tomb of Humayan here.  So the market area is where the hundreds of workmen would have lived for eight years during the construction of the building.
It wasn't until about 45 years after the tomb was completed that a person named Mihr Banu built the gate and enclosed the market place.

It makes me wonder:  where did the market go?  In the history of Delhi and Nizamuddin village, 1612 isn't all that long ago.  Why did it move away?  There are still thousands of people in this area.  When did their market place disappear to spread out in other places of the neighborhood?
Sometimes it's just as fascinating to me which things of history disappear as which things are still remaining.
at 3:18 PM