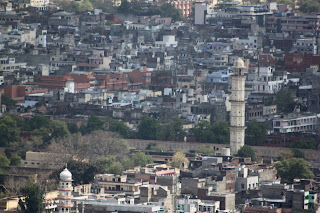 The only other time I was in Jaipur, my friend and I walked around looking for a tower that was supposed to have an excellent view of the city.
We never found it.
Instead, we found a shoe shop where she bought shoes, and a shopkeeper who let us climb up to see the view from his roof when he couldn't tell us where any tower was located.

This time, I found it.
And yes, what a view. 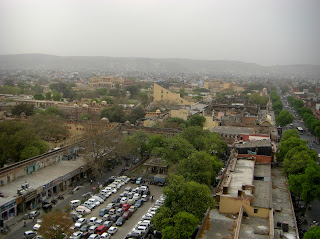 Built in 1749 to commemorate a military victory, it's the tallest structure on Jaipur's skyline at seven stories high..
It's name, Swargasuli Tower, means "tower to heaven" or "the heaven piercing minaret".  It's also known as Isar Lat--and maybe that's why I couldn't find it the first time:  I was calling it by the wrong name?

Ishwari Singh's victory over his enemies is what instigated the building of the tower, yet there were other rumors as to why he wanted to build it.  One being that from this vantage point, he could watch the neighbor's daughter when she was out in the garden.
It seems he just wasn't very serious about fighting battles, and when they attacked again, he chose to kill himself rather than fight the army that might be too strong for him.

That's too bad, because what he did like more than anything else was art and poetry.  In fact, he excelled at the art of making designs and figures in paper cutting--his favorite hobby.
Sigh.
The world will never know what great art it has missed with his early demise. 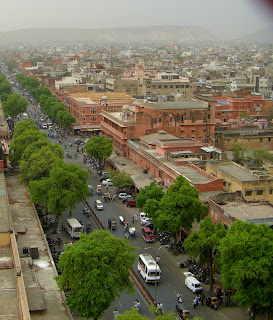 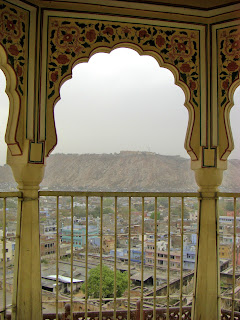 But the tower remains.  And from this lookout far above the city, the view is still pretty spectacular.