A friend of mine sent me this link, and I said to her:  "I MUST see that place."

So, like true baoli hunters, she and I headed to the village of Abhaneri as soon as we could. (Well, maybe I'm the hunter and she's the one who is a good sport about it all.) 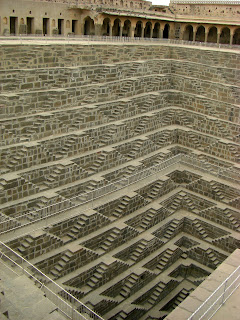 The Chand Baori (they say "baori" instead of "baoli" in this area) is the deepest step well in India--maybe even in the world, as I'm not sure they have them outside of the Indian subcontinent--at 30 meters deep. 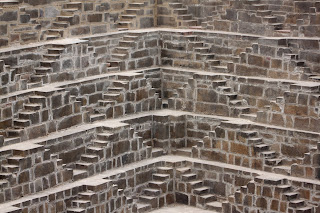 It has 3500 stairs. That's a lot of stairs.  The folklore that goes along with that says there are many stairs so that a person who has thrown a coin into the well would never be able to retrieve it. 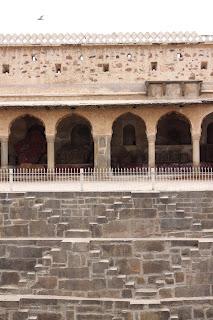 This stepwell is associated with the nearby Harshat Mata Mandir.  So when it was built in the 10th century, it was used by worshippers for ritual cleansing. 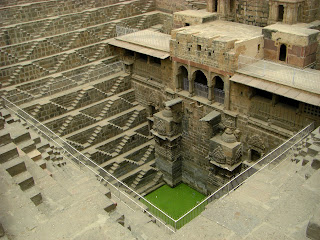 It also helped to solve the problem of lack of water in the area.  Because it was deep enough to give the people access to water all year round.
The water today is green and not very appealing at all. 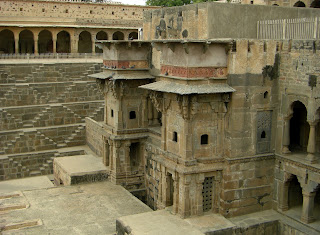 The royal family and nobility living in the area used the baoli as a retreat and a hot-weather hang out. 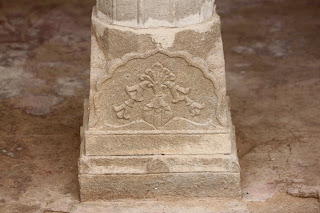 So maybe because of them, the carving here is much more elaborate and detailed than at other step wells. 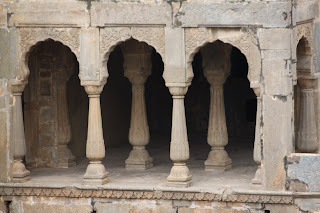 It's fascinating architecture, and because of that it's fun to photograph.  Or film.
The local "guide" who followed us around the baori told us there were many movies filmed here.  "Even a hollywood movie," he claimed.
"Yeah, which one?" I asked.
Apparently it's true, though, because the stepwell even shows up in the trailer of The Fall.

Good architecture is worth hunting down.
Especially when it's a stepwell.
at 12:00 PM