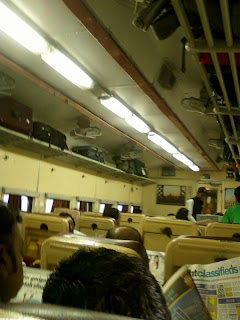 The shatabdi trains are among the fastest trains in India.  They are day trains, have fewer stops than most others, and they all return to their origin in the evening.
Most leave fairly early in the morning.  Which means you have to be serious about getting up in the morning and being on time. I had to run to catch my train because the taxi was stuck in the traffic jam well outside the station.
After my taxi had not moved for about ten minutes and my watch said the train would leave in eight minutes, I said to the driver, "How far is the entrance to the station?"
"It's just there around the corner and to the right.  When is the train?"
"In eight minutes.  Do you think I should go on foot?"
"I think you should go on foot, and you should go quickly."
So I paid him, ran to my train and did just barely make it.
Shew.

Now this is not luxury, but there are some pretty good things about the shatabdi.
The cars are air conditioned.and they serve you a meal and give you a newspaper to read.

And you MUST take the newspaper.  You must.
I refused it.  And the man threw it into my seat anyway.  Then five minutes later, he came back and threw in another one.
Thanks man.  I'll be sure and read it all twice. 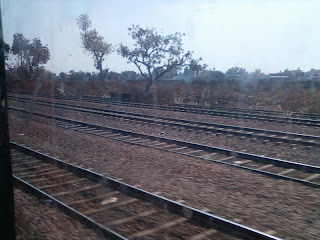 I guess they want to be sure you have something to do while they prepare to bring you your meal.

Most people around me were sleeping.
I spent my time looking out the window, seeing the sights.

And then came the tea.

With a thermos full of hot water so you can make it yourself just the way you like it.

As my train adventure began with running, so it also ended.
On the morning I left to return home, my taxi arrived late.  I arrived at the station at the time my train was supposed to be leaving.  I ran in, and asked the nearest newspaper seller which platform the train was at.
"That train is right there," he said, pointing to the nearby train that was beginning to move.
Ah!
So I ran and jumped onto the nearest car, and--shew, again--did make it home.