On this moldy wall, someone's expressed support of Anna Hazare is slowly fading away.
It made me wonder what is left of his campaign that made such noise last month. 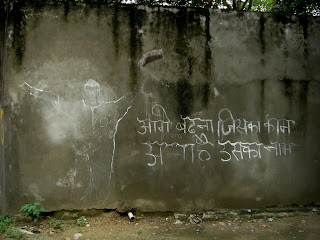 He's still out there making speeches and other demands. But there's much less noise about it.

In looking for current news about Hazare, I found an article about another anti-corruption hunger-striker and noted that they published the strategy. It emphasized what is annoying to me about the "hunger strike unto death": No one is serious about dying.
“If you go on a hunger strike till death it has to be a very specific issue,” Ahsan said. “The objective is very laudable, but you are not going to achieve it in the 45 to 50 days that you can survive on a hunger strike.”
I'm not convinced that much gets done through hunger strike.

I'm still waiting to see what impact Anna has.
Wondering if he soon fades away with the graffiti.

Someone who makes a lot of sense about the roots of corruption is Vishal Mangalwadi.
Here is some of what he had to say about it:

"[There is] no regard for personal dignity and no respect for honest hard work. Merit is irrelevant in the culture of corruption, only appeasement matters.”

"He [Anna Hazare] is indeed following our great men and the gods that our sages created. They crafted our myths and legends – our folk literature – in their self-interest."

"In order to eradicate corruption, we need a different Messiah: one who would not extract his ‘pound of flesh’ but sacrifice himself for our salvation. We need a Savior who is a shepherd, who would redefine our cultural idea of leadership as servanthood."

It is possible to get rid of corrupt officials and jail corrupt ministers, but the challenge is to change a culture.
at 9:20 AM