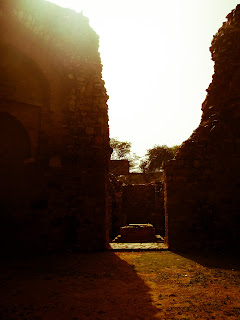 Ghiyas ud din Balban is the warrior slave who took over the sultanate of Delhi after Iltutmish, Razia Sultan and her unsuccessful brothers.
As a child he was captured by the Mongols and sold into slavery.  Bought by Iltutmish, he climbed his way up through political and military gain, finally declaring himself emperor when there was no male heir for the throne.

Balban was an iron-fisted ruler.
He established an efficient espionage system, breaking up the noble networks and their opportunities for hatching plots to usurp the throne.
He was tough on crime and set up garrisons of Afghan soldiers to keep peace and carry out strict justice for all classes.  He ordered that the forests the bandits hid in be destroyed so they would have no where to take refuge.
One of the most important battles he fought was against the Mongols--the very power that had originally stolen him from home, enslaved him and set him on the path towards Delhi.  He successfully defeated them and kept them out of his territory, but lost his favorite son in the battle.
Balban subscribed to the Divine Right of Kings and he is the one who put 'sijda' into practice--to greet the sultan, people had to kneel and touch their head to the ground.  He thought he was God's representative on earth, was guided by God and was, therefore, above any public scrutiny.  There was no room to question his actions.  To keep people in a proper state of awe, Balban was followed around by tall, fearsome looking guards with their swords constantly out and at the ready.
It could be dangerous just to smile when Balban was around. 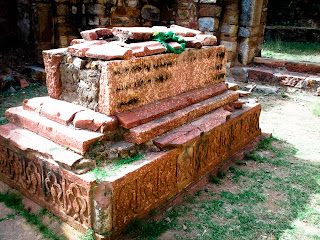 Architecturally, Balban's tomb complex claims the first true arch built in India.
The conservationists have been at work here, but the last 700 years have taken their toll on the tomb.
Even a "divine right" to rule can't make a man or his tomb eternal.
at 2:42 AM