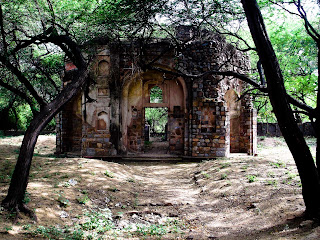 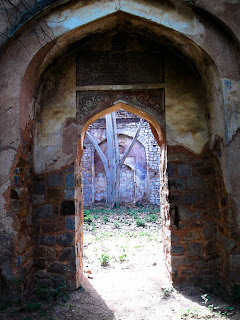 One of the interesting things in all of my reading and research over Mughal history and architecture means I sometimes find unexpected links.  Mysteries I once thought unsolvable--for my limited knowledge and information base--come unraveled.
In reading about Balban and learning his story, I came across a picture of a place I'd been before.  The caption sited it was the tomb of Khan Shahid, Balban's son.  Khan Shahid died fighting against the Mongols--the actual Ghengis Khan people who had captured and enslaved his father.
When I first came upon this tomb, the historical marker was overgrown and uninteresting.  Somebody Khan died--aren't they all named Khan, and didn't they all die?
The tomb was an enchantingly overgrown structure.  It may not be the most well preserved, but that's just what makes it so appealing--the trees and vines winding through all the old stones and pillars.
And now what makes it even more appealing is that I can place it in context historically.  It represents Balban's greatest loss and the end of his sultanate legacy.
The impervious dictator died a broken man when his dreams died with his son.  And this is all that remains today of his grief written in brick and concrete.
at 5:19 PM