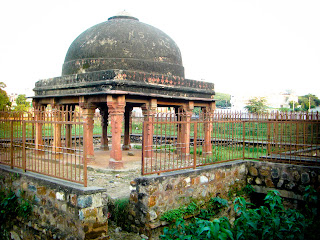 One day while building his city in south Delhi, Iltutmish had to decide where to dig a well.  The people needed water and he needed a good location.
He went to sleep on it.  As he was sleeping, he dreamed that The Prophet came and showed him where to dig the well.  In the morning, he rushed out to the spot he had seen in his dream and there he found the hoof print of a horse.  The Prophet's horse, he said.

So his men started digging and soon water rushed up, filling the area with enough water to make a lake.
Iltutmish's choice of well location was blessed and there was enough water for the people. 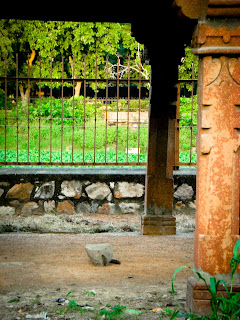 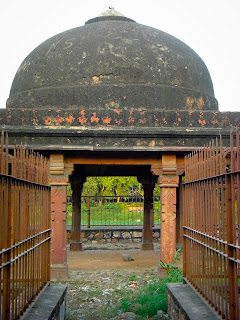 A pavilion was built in center of the lake to mark the spot where the hoof print was found.

I read that a replica of the rock with the hoof print is still in place.
But when I arrived at the lake--now less than half it's original size--the gate to the pavilion was all locked up and I couldn't get close enough to see.

I want to know if there's really a rock with a hoof print in there.  But there was no one around to let me in.  The gate wasn't even padlocked, it was wired shut.

Maybe some day when the cricket-playing kids are all in school I'll go back and climb over the fence....
maybe... 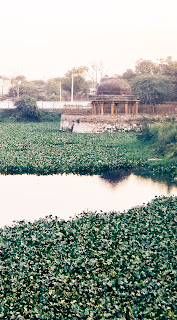