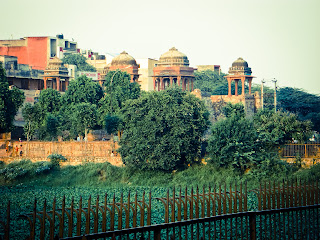 The lake that sprang up at Hauz-i-Shamsi was such a nice place that a palace was built there:  Jahaz Mahal, which means "boat palace". 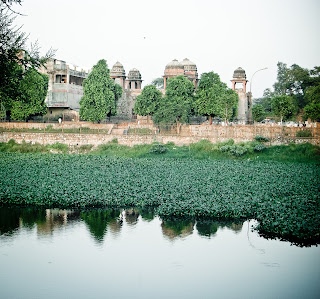 Maybe the royal folks took their boats out on the lake, but it was for sure a nice getaway on a hot Delhi day. 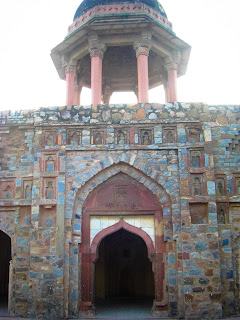 These days it's not a lot more than an old brick building beside a weedy pond.
The garden beside it is a favorite of cricket players.
The guards in the palace--protecting it from vandals, I guess--spend their time yelling at the boys who climb into the moat to retrieve their cricket balls. 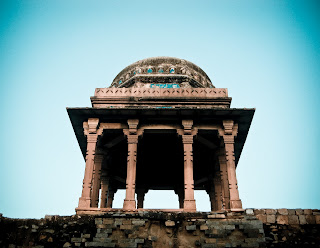 There are a few hints as to what might have been palace grandeur 600 years ago--blue tiled chatris, carved red sandstone pillars, echoing arches. 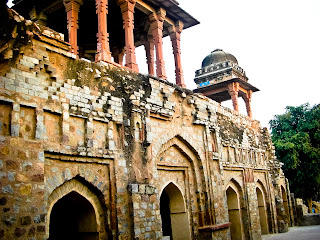 I wanted to go up to the second story and see the view over the lake and neighborhood.
"It's locked, do you have the key?" I asked one of the hovering guards.
"Yes, it's locked.  Yes, I have the key," he replied.
"You have the key?" I asked again.
"Yes," he reached into his pocket to prove it, happy to show me.
"Can we go up the stairs?"
"But this is not allowed," he answered.
"Oh."
We both looked sad at this news. 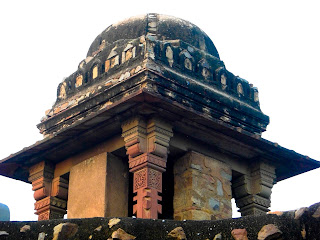 Again, I have to go back when there are no cricket players around try again.
There are so many places that are not closed off to visitors that it's surprising when a door is actually closed and locked.  And often it's a door I want to open. 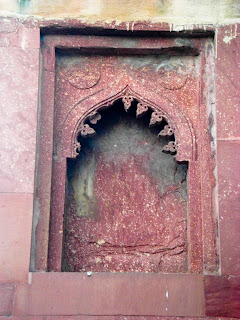 Ah irony.
Maybe like this fake arched window, there's really nothing on the other side to see.
But when I'm exploring the ruins of an old palace, I like to see as much as I can for myself.
at 12:54 PM