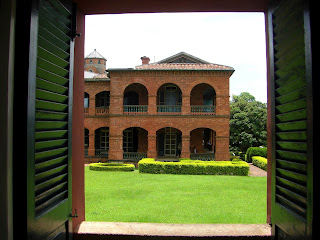 The fort, as one of the oldest existing buildings in Danshui, has been called many things.

It was "Fort San Domingo" to the Spanish who built the first fort here in 1629.

"Hongmao Castle" to the Dutch in 1642 when they kicked the Spanish out and it was called after the red haired folk who lived there (Fort of the Red Heads).

"The Consulate" to the British, who leased it in 1867 and turned it into their compound.


And "historic site of the first grade" to the Taiwanese who repossessed it in 1980 and turned it into a tourist attraction. 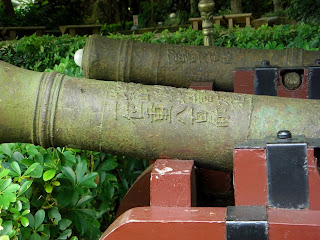 It's a fort, so it needs cannons, but I wonder if these ones were ever used from here, or just put there to look impervious.

This one says, "The cannon is cast by the order of the emperor in Chiaching 18th year of the Qing Dynasty, weighing 800 catties."

I wondered what a catty is...probably not a fat cat...
Nope.  I looked it up.
A catty is a traditional Chinese unit of mass equivalent to about 600 grams.  So the cannon would only weigh about 96 cats, if I've done my math right.
...if we were weighing in cats, that is... 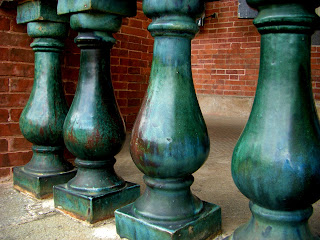 Anyhow.
The British made all sorts of renovations.  The guide pamphlet listed some of them as the "elegant features".

One was these green, glazed bottle railings.  They are pretty, it's true. 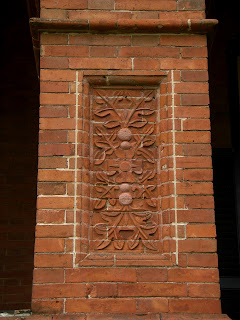 Another was the brick carving.  Come to think of it, I've never seen brick carved before.  Cool.

So go to the fort.  Look around.  Learn some stuff.
But forget about measuring in units of cat, people don't really do that.
at 3:31 PM

Very Pretty with lots of historical changes going on! If you want to weigh in cats, however, you need to find out the average weight of one. I've seen some Fat cats!!