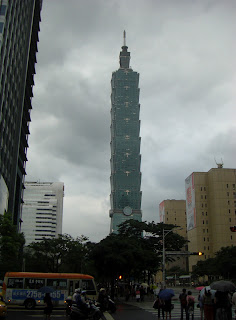 How many floors do you think it has?
Did you guess 101?
Good.
But there are actually five more floors underground, so it should be Taipei 106.
Or maybe not.

It's more than half a kilometer high.  Whoa. 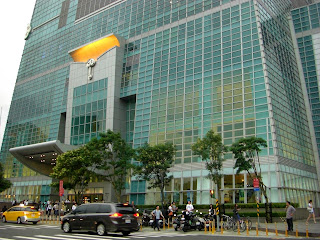 To get you from street level to the top, the tower has one of the fastest elevators in the world.  It travels
1010 meters per minute.  Which is also:
16.83 meters per second
55.22 feet per second
60.6 kilometers per hour
37.7 miles per hour.
The elevator man will tell you all of that on your way up in several different languages, but it's hard to keep up with him.

The blue-green glass offers UV protection to those inside.  It's also supposed to give the building the look of bamboo--which was intentional, to show strength, growth and resilience. 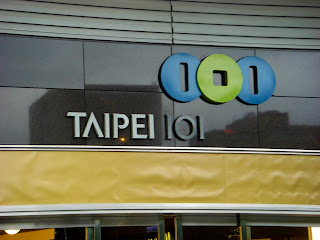 It may be an engineering feat,but there are elements of design evident all over the place.

The repeating of 8 (a number of luck and prosperity) segments of 8 floors echo the rhythms of a pagoda (serenity) or a stack of Chinese money boxes (prosperity).

Even the emblem over the door is meant to show three coins with central holes implying the number 1-0-1. 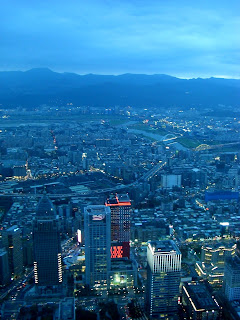 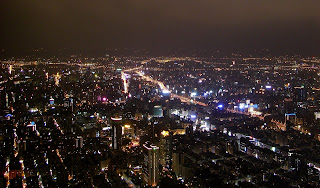 The building is even helpful in telling time as a giant sundial when its shadow falls in the adjoining park. 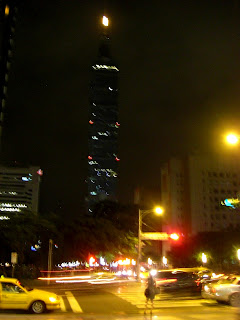 At night, Taipei 101 stands like a candle with a flame at the top, said to symbolize liberty and welcome. 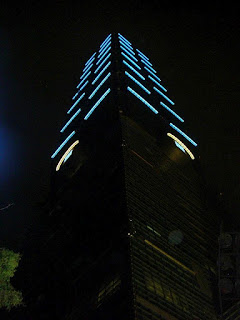 From 6 to 10pm each evening, the tower lights up in a different color for each day of the week:
Monday - red
Tuesday - orange
Wednesday - yellow
Thursday - green
Friday - blue
Saturday - indigo
Sunday - purple
I visited on a Friday.

The more I learn about it, the more impressed I am.  The designers and builders could have just built a building to be the tallest.  That's a pretty top level feat in itself.  But the amount of thought they put into the design and character of the building makes it very likeable.
at 3:37 PM