I just lived through a day orchestrated to bring us to Mexican food--good Mexican food.
Our plan today, my friend and I, was to go to a certain market where there was supposed to be a nice bookstore and a really good (dare-we-hope: authentic) Mexican restaurant. Good Mexican food is a rarity on this side of the world.
We found the bookstore. It was as expected. Not fantastic, but had books.
Now it was time to eat.
We found all the signage for the restaurant we wanted to go to, but where was the entrance?
"Oh that place is finished," said the guard we asked.
"Finished?"
"Finished."
Sad, sad news. No Mexican for lunch.
We found a coffee shop to eat at before we melted and returned to my house.

Meanwhile, my friend's husband was supposed to be leaving on a plane. But the plane's airconditioning was broken and they were sitting out on the tarmac in 104 degrees unable to leave. Several hours later they deplaned all the passengers and moved them to a 5 star hotel in the north of the city.
A 5 star hotel? Hmm. This might be our only opportunity to go see what it's like inside...
Our "only choice", then, was to head there as soon as nap time for her one year old was over. 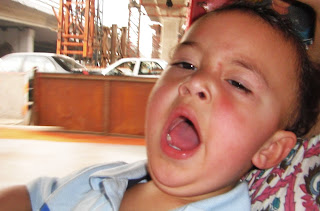 Riding in autos is hard, tiring work. But that's what we ended up in.
The call to the taxi to take us to the fancy hotel was at 4:20pm. The dispatcher said: "There is no taxi available for half an hour. 5 o'clock it will come for you."
That was very bad math and not half an hour. But I agreed.
At 5:15 I called the driver and went through extensive directions on how to get to my house. Twenty minutes later I called and asked the driver where he was. The name of the location he gave me was about half an hour away.
What!
Okay, cancel that taxi service.

Now what do we do? It would be fun to go see the 5 star hotel that we wouldn't normally have opportunity to go see. But it was getting late. We would have to have time to come back for the kid's bedtime.
Our new plan? Walk out of the neighborhood and find our own taxi. If we can't get one, we walk a little further and end up at the Chinese restaurant nearby.
As we walked along, an auto passed us asking where we wanted to go? An auto wasn't in the plan. Because it was hot and we were tired and we didn't want to over-tire the kid before we'd even gotten anywhere. But there was the auto...
With a reasonable price.
We looked at each other.
We took it.
So we didn't exactly arrive at the five star hotel looking as if we belonged there, but they let us in anyway.
We walked through the lobby (unimpressive) and put our feet in the pool (slightly impressive). Then we headed out again to find dinner.
We thought we would go to a nearby pizza place and we got an auto to go there. I told him which block to take us to and when he pulled up, what did I see? A sign for Sancho's, the Mexican restaurant we'd been trying to find at lunch time.
"There's Sancho's," I said.
My friend misheard me to say, "There's a sandpit." Which was also true. Because all in front of the restaurant was construction and sand and a great big hole--no way for us to walk through.
The driver, though, showed us the path where people were walking through the construction site.
So my friend and I stood outside the Mexican restaurant and had this short conversation:
"We came here for pizza, but there's Sancho's. Which one do you want to go to?"
"Well, we know what pizza tastes like, we haven't tried Sancho's."
"Right. Let's go." 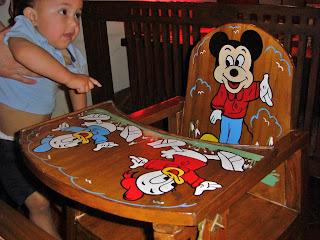 When we stepped inside and were told they had a baby chair, we knew we had arrived. A marvelous baby chair. Even though I had to eat with one hand while I held my fingers on the latch to keep the tray down and the kid from escaping.
That, and the excellent food with real cheese and real sour cream made all we had been through throughout the day totally worth it to end up here.
Disappointment at lunch time.
Waiting and waiting for a taxi that never showed up.
A plane with air conditioning that didn't work.
A visit to a 5 star hotel.
A search for pizza because we hadn't been successful at lunch.
It had all brought us here.
"That's what you call 'serendipity'," I said.
"No," replied my friend, "That's what you call the orchestration of a good God who knew exactly what we needed."
Absolutely.
at 1:26 PM