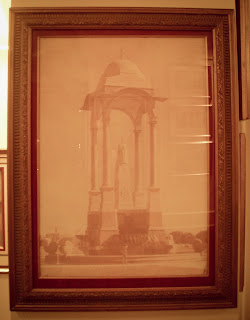 A friend and I wandered through an old hotel in Delhi and I found this photograph on the wall--evidence that the statue of King George V used to inhabit the chatri near India Gate.
It reminded me that I wanted to go visit the statue and see how the park was coming along. 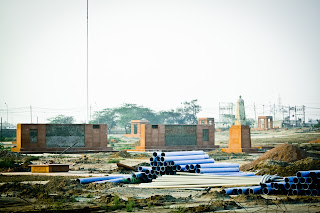 In some ways, I was not surprised by what I found:  the park was still under construction, though it had been over a year. 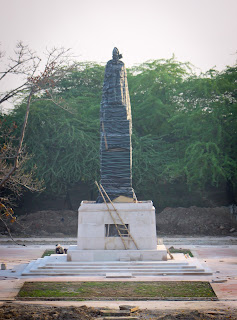 But I was surprised by other things.
King George was all wrapped up and bound in black plastic. 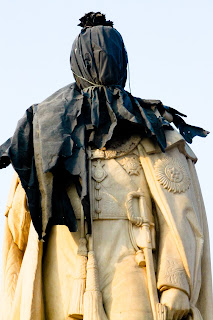 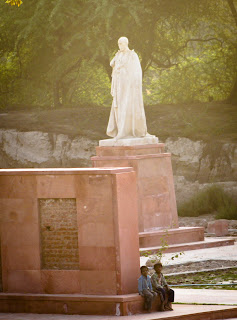 As were some of the other statues.
It's disturbing, isn't it? 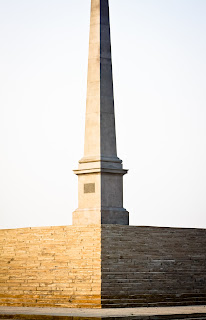 The construction workers and their families had "moved in" and were slowly improving the surroundings.  The scrub brush was all gone, replaced by granite and marble walkways.  But there was a long way to go yet.
Before they are through there will be an amphitheater and a 31 meter flag pole to tower over the coronation pillar left behind by the British. 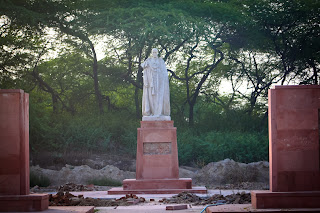 The only news I could find said the park might be ready in a year's time.  The authorities were also hard at work trying to come up with a name to replace "coronation park", something to be proud of.

I understand the love/hate tension with King George.  And I admire the efforts of the park committee--they could just throw out all the old, unwanted statues and erase this part of their history.
Instead, they're going to turn it into a nice place to play cricket--admirable.
at 2:38 AM