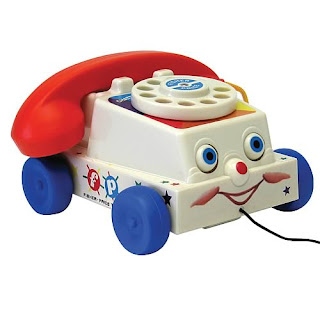 What our phones were capable of and the trouble they could get us into used to be much simpler.
Like, as simple as whether or not I would let my brother have a turn playing with the toy phone at Grandma's house, or get in trouble for not being a good sharer.
Nowadays things are more complicated.

My current phone doesn't have wheels or a pull-string, what it does have is a recording feature.
There are instructions for it in the little user manual. They are not your typical instructions, though.
This section of the manual is titled: Make Fake Calls.
"Simulate an incoming call," it reads, "when you want to get out of meetings or unwanted conversations. You can make it appear as if you're talking on the phone..."
Wow.
Instructions in how to be irresponsible and avoid dealing with uncomfortable or unwanted situations. Right there in the manual! This is an application setting already programed into my phone!

Maybe it's not just phone technology. Maybe the whole world is way more complicated than it used to be.
Dear me, we had no idea what we were asking for when we thought it was cool that a phone could follow you everywhere. Only now, it doesn't need the pull-string.
at 10:06 PM