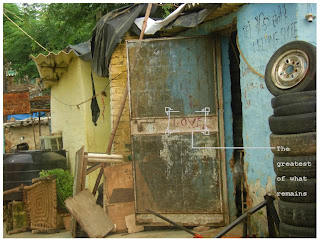 My friend Vivie, told her friend David that she loved him.

At the time, it felt awkward to be standing there. But in hindsight, I think I was witness to a holy moment.

“I’m just singing,” David replied.
Which is sort of a strange reply. And somewhat exacerbated the awkwardness.
But when you consider that the odds are not high that you will receive a favorable response when you tell a teenage kid you love him, it’s a pretty good answer.

Vivie loves him because he’s David, and he’s being so.
“I know,” she smiled. “And that’s why I love you. It’s a good thing.”

They smiled at each other.

Awkward for the rest of us.

But that’s just it: we’re not used to being in the presence of holiness.

Vivie and David have a good and trusting relationship. They can share their affection and love for one another in a way that leaves out pretense or manipulation—even awkwardness, as far as they’re concerned.

When Vivie observed David singing along to a song in the background, fully disregarding the reaction of those around him, it made her love for him swell up within her—and she was compelled to express it, to make him aware of that affection.
Holiness: unfettered, unconditional love abounding toward someone who’d done nothing to earn it.
That generosity of expressed love expanded and affected the rest of us standing there. It was so unusual, so real, that it left us uncomfortable.
Why?
Because we were witnessing something we are all so hungry for: unconditional love. And the possibility that it might be real and maybe someone could love us that way, too, left us hopeful, hungry, a little bit desperate even…and ashamed.
Ashamed because we don’t just want to be David, the receiver of the gift of love—we could be Vivie! We could be the generous friend who unabashedly declares the truth of our affection for those we love.
When it’s genuine, love is rarely rejected, so why don’t we give it?
Because we’re sucked in by the fear that love is not all we hope it to be and that once expressed, it will steal something from us, make us vulnerable. So we hold it in and instead rob others of the gift of being loved.

So close. Sometimes we can be so close to knowing and experiencing love the way God intended it to be, freely given and received. But it stays just a little bit out of reach.

And that’s why during those rare moments when we do see it, give it, experience it, it’s all the more holy. Sacred.

Vivie, you can show me any day how to love like Jesus. And I will do my best to see and learn from it.
at 3:15 AM