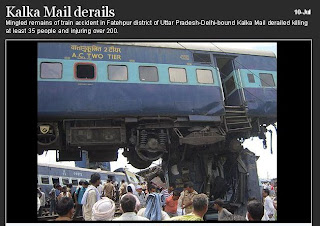 How does something as horrific as this happen?
Train cars piled on top of one another, wheels torn off and metal crumpled like a soda can.

It must have been terrifying for those on board the train. 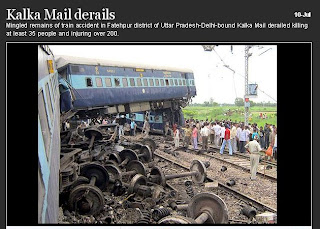 The Kalka Mail derailment was all over the news headlines.
Until it got eclipsed by news of the blasts in Mumbai.
Then the news of the terror attack in Norway and it's strange aftermath story took over. Hatred, by the way, is one destructive force.

I have wondered, but haven't heard much about how the people of Japan are faring. They are an "astonishingly" resilient people.
Haiti is no where near recovered from the earthquake that hit in January of 2010.

It's much easier to live inside a bubble where the world's troubles don't affect me.
But that isn't good for any of us.

So I'm making it a goal to pay attention to the pain of someone other than myself today.
at 4:15 AM