Peppers in the road 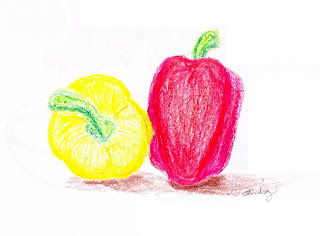 We were driving along and I was lost in thought when the auto driver did some crazy stunt driving, swerving around in the road. He was making an attempt to grab a bag of something out of the middle of the speeding traffic.
The motorcycle behind us screeched its brakes and went around us, scolding loudly.
The driver decided it was too dangerous and he pulled over. Still a dangerous maneuver--he, himself, ran out into the middle of the traffic and retrieved a bag of peppers, which he stowed inside the auto.

And we drove on.
Whoa.

I hadn't seen where the peppers came from, but apparently the driver had, and in a matter of moments he was yelling to another driver to come up next to him.
At the upcoming stoplight, the other auto pulled up beside us. "Have you got them?" the driver breathed.
"Yes, yes, they're safe," my driver handed the bag full of red and yellow peppers to the other, whose auto was full of vegetables.
"Oh," he sighed, "Thank you, thank you. Meherbani. You have done a good thing for me." He touched his forehead and chest in deepest gratitude.
"Yes, yes, take care. You have many vegetables there. I went out and got these for you."
"Thank you, thank you, brother," the other driver pulled out a cigarette, lit it and inhaled deeply to settle his nerves. "These ones are hard to find. I was going back for them."
My driver nodded, "I saw. I saw."

The light changed and again we drove on.
And for the rest of the ride, the driver alternated between whistling and singing.
Yes, it was a good deed.
Well done, sir.