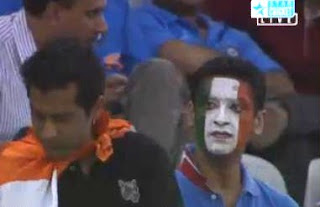 Okay, so it's an epic game, right? Or as the commentator called it" "the number one cricket clash".
India vs. Pakistan.

If winning the quarter finals elicits fireworks and midnight cheering, what does playing Pakistan in the semi-finals mean? I do know that for schools and government offices, it was only a half day.

So yeah, I am watching the game.
And I have no idea what these sports commentators are talking about:
"Running on the wicket" which apparently is "a very, very dry wicket".
Somebody is having "trouble with the line". There's a bunch of lines...
Overs. When does one begin...and when is it...over?
"Straight drives" and "boundaries".
It's a foreign language to me.

I admit that I fell asleep for an hour, but when I woke up again Sachin Tendulkar was still batting--so did I really miss anything?
Don't think so...

Still waiting to find out who gets to go to the finals...