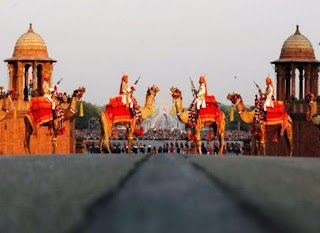 There's an annual event in Delhi at the Rashtrapati Bhavan.  It's the closing ceremony of the Republic Day events, known as Beating the Retreat.

I have no pictures of my own because cameras--and anything else you might carry--are strictly not allowed (which is a story itself).

What I do have is a picture in my memory.
Imagine this...
The sun is setting behind Rashtrapati Bhavan with the silhouettes of the BSF soldiers and their camels standing at attention, while the chimes in the towers rang out 'Abide with me'.
It was beautiful.

Beating the Retreat is a leftover from British days.  It's a ceremony that marked the end of the day retreat of troops from the battlefield.  The Indian military today still takes great pride in making this ceremony their own, with the President as the guest of honor.